It is that time of year again, where every non-knitter is wondering what to buy for the knitter in their life. To make things a little easier, I have decided to do a quick round up of knitting related goodies on my list this year.

1)Knitting Yarns: Writers on Knitting  by Ann Hood Possibly the only thing that I love as much as knitting is reading about/listening to others who are passionate about knitting. This book explores what is so magical about knitting in 27 essays.

2) Geode Glitter Sock Yarn – TheLittleMountYarnCo The lovely Madeline from TheLittleMountYarnCo dyes the most beautiful yarns and this is no exception. I love the shades of purple and blue in this sock yarn and the stellina adds just the right amount of sparkle – who doesn’t like a little sparkle at Christmas?

3) Sweater Stitch Markers – needleclicksEtc These beautiful stitch markers are just what every knitter needs to keep their projects organised and fun. They come in all sorts of woolly knits from socks and mittens to sweaters. You certainly won’t get these mixed up with anybody else’s stitch markers at knit club!

4) Sock Blockers – Knit Pro Sock blockers are an essential tool for those who love knitting socks…and it can get a bit addictive. There are so many lovely blockers out there, but the knit pro ones are a great starter.

5) Knitting Mug – KellyConnorDesigns this cheeky and playful mug is perfect for any knitter who likes craft based puns. This is the perfect gift if you do not feel confident enough choosing yarns or accessories.

Two weekends ago, I was lucky enough to be at Edinburgh Yarn Festival, and I had the most amazing time. The previous EYF was in 2013, and although I missed that one, I was not going to miss this one – and am I glad that I was there.I had the best weekend I’ve had in a long time surrounded by great people.

I had managed to book two classes – Learning to Spin on a Drop Spindle and Sock Design. Both classes were full of insight and laughter, and I learnt more in those three hour classes than I ever thought I could. There was so much crammed into them.

The marketplace was full of vendors from all over the world, and it was the perfect mix of local and international sellers. I spent so much time petting and stroking all of the lovely yarns and fibres on show, and more than a few came home with me. I also had the chance to catch up with a few friends and some familiar faces, as well as make new friends 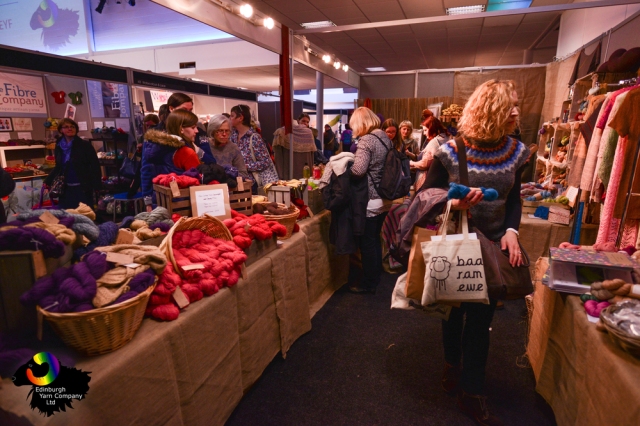 The official photos were uploaded on Sunday (I spent too much time shopping and talking to take photos that were any good) and were taken by the wonderful Katie Blair Matthews. In this one, you can just see me right at the end, chatting with Victoria from Eden Cottage Yarns and Justyna – who were celebrating the release of their partnership, with Justyna designing the Aisling shawl in collaboration with Victoria’s beautiful yarns. I cannot wait to knit this shawl, and Justyna helped me to pick the perfect colours.

Speaking of colours, how perfect is this photo of the Easy Knits stand? I am a huge fan of Jon’s yarns and he is hugely talented with colour. I picked up a few things from him, including one of his new Gobstopper’s and they were as beautiful as usual. Katie must have taken this before the market was open, as Jon’s stand was busy all weekend. 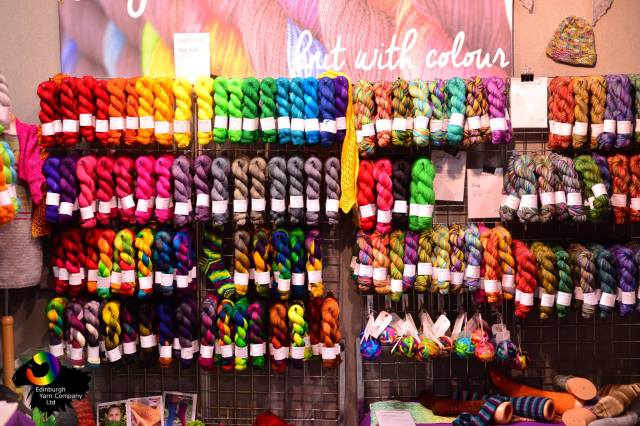 Yesterday, it was announced that the next Edinburgh Yarn Festival will be in March 2016 and I am looking forward to it already. Here are my purchases…and there is plenty to keep my busy: 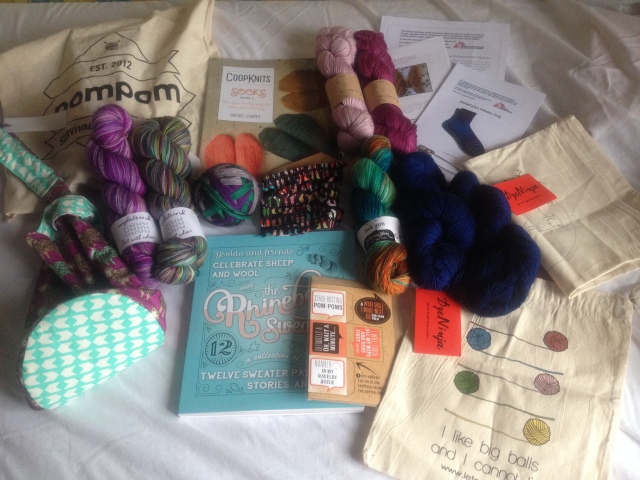 Did you go to Edinburgh Yarn Festival?

It is no secret that I love yarn. I have since I first learn to knit, and since then my stash has been growing at an unbelievable rate. I have been knitting for almost 10 years now, and my stash acquisition is immense. I could easily continue knitting at my current rate and not need to buy anything for a good few years.

It must have been divine intervention then for me to come across the Bash The Stash 2015 forum thread over on the British Banter Ravelry group.  The challenge is simply to reduce your stash during 2015, and there are three categories:

Lukewarm Llama – Trying to knit more than you buy

Frozen Shoulder of Lamb – No new yarn will enter the house!!

I have chosen to go Cold Sheep as I already have plans to attend two knitting festivals this year, and it would be a shame to go all of that way and then not buy anything! So far I have done really well and not purchased anything, despite seeing some very tempting bargains.

I have even begun allocating some of the yarn in my stash to specific projects so that I can begin to knit them as soon as I want to without having to worry about matching yarns to patterns or not knowing that I already have the perfect yarn in my stash.

The hashtag #bashthestash2015 is being used on Ravelry and Instagram for those that want to take part, and I have even been extra nerdy and developed a spreadsheet for myself.

I may be a little late to post about Yarndale 2014, but hopefully it is worth the wait. This year was the second year of Yarndale, and whilst I was unable to go last year, I was determined to make it to this one. Once the tickets were booked, I obsessively looked at stallholders and make my list of goodies to buy…and the list grew every day.

I was up incredibly early – I am not a morning person at all, and the 4:30am wake up call was only made easier by the fact that I would soon be on my way to buy lots and lots of wonderful yarn. I went with the lovely Amy AKA Minimole, and after two trains, one taxi ride and a short journey on the Yarndale bus we arrived. 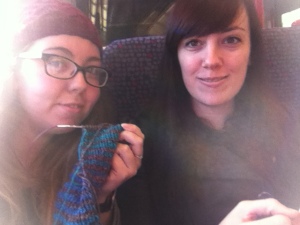 More than a little public knitting was done was done whilst enjoying the views from the train, and it was so nice to see more and more knitters getting on the train as we pulled in to each station. The Yarndale bus ride was fantastic too, and you could feel the excitement growing as we were getting closer.

There were so many stalls filled with wonderful items, and the stallholders were so friendly and passionate about their crafts. I was particularly impressed by the layout of the stands. Despite the crowds, everyone was very patient and understanding, and there was enough room to move about in the aisles.

It was so easy to strike up conversations with other crafty enthusiasts, and on more than one occasion I got talking to people about what we were planning to use our purchases for whilst we were waiting to pay – and everyone was really nice as I was trying to maneuver my way through the crowds.

Obviously no blog post about a knitting show would be complete without a photo or two of my haul. I had a rough budget and actually managed to stay within it, and I have all sorts of ideas for my purchases. I had two items on my list that I really wanted, and I was able to get both. The first was a skein of Deeply Wicked sock yarn in the colourway Vortex by Easyknits…and I may have gone a little bit crazy at the Easyknits stand, but it is pretty easy to see why. I managed to get the last two skeins of Vortex (the blue-yellow combination) which will become a shawl, and I also wanted a skein of Sea-quine by Sparkleduck which will also become a shawl.

There were so many new stallholders and sellers that I had never seen before, and I have marked my Yarndale brochure for all of the sellers that I did not managed to browse properly on the day. I have already put a few things on my Christmas list!